skip to main | skip to sidebar

Our new star curtain comes in 6/10 foot panels. Twinkle, chase and blink effects as well as dimming and no camera strobing. All pieces lace together and are standard DMX controllable.
Also new in DMX 5 controllable LED par lights. Call for more info
Posted by Moderator at 3:23 PM No comments:

Picture This Production Services and Stage Just in-The AJA Ki Pro is a tapeless video recording device that records high-quality Apple ProRes 422 QuickTime files onto computer-friendly media. Because it features SD/HD-SDI, HDMI, and analog inputs, you can interface with virtually any type of camera you might own or rent.

Posted by Moderator at 7:24 AM No comments:

Picture This Productions Services is now offering a 5 Pack Wireless ClearCom System. With a range of up to 100' , it is self-contained in a single road case for easy packing. This system is perfect for any production where a Director has to communicate with roving shooters. The basestation is only $100 and is compatible with any number of wired ClearCom beltpacks available for $25 each.

Posted by MartinFromLonden at 9:19 AM No comments:

Just in at Picture This: Sony HXR-NX5U
Say good bye to tapes. The new Sony NX5U is the companies newest prosumer camera designed to take the place of its current HDV cameras. The NX5 is part of Sony's new line of NXCAM cameras, and just as HDV replaced miniDV, NXCAM is designed to replace HDV. The NX5 records 1080i 60i, 30P and 24P as well as 720P 60P all to SD cards or Memory Sticks. But it doesn't end there, the NX5 also comes equipped with the HXR-FMU128 Flash Memory recorder. This 128GB hard drive unit is capable of recording over 700 minuets of the cameras highest quality 1080i HD. With two 32GB SD cards and one 128GB Flash unit, you can record for 1,068 minuets or roughly 18 hours of Footage. Now thats just one way to shoot, you can also simultaneously record to both the flash unit and the the card media giving you a back up of your footage, or you can have a copy for you (flash memory) and a copy for the client(card media). Or you can shoot Standard Definition on one and High Definition on the other. You can even choose to have one media record with the button on the hand grip and the other media record with the button on the top handle. This camera system allows you to choose the work flow that works best for you and your clients. Oh I forgot to mention, it can over crank to 120FPS.
Posted by Moderator at 2:56 PM No comments:

Picture This just completed the ADP General Session for their presence at the National Automobile Dealers association in Orlando, FL. With a skeleton crew, we flew out to Orlando where I met up with a local team to set up for the show.The hotel was not able to get us into the room until midnight so we pulled an all-nighter. In the morning the Director took over the helm and lead a fresh crew through a marathon of rehearsals right up until showtime when I returned from my sleep to assist the crew with the show. Live events are known for their long and unusual hours but even still, I am rather proud of this one: 4am pacific time through 10:30 am the next day eastern time! After that, we headed over to the ADP booth at the convention center where we shot a short video to be sent out on webcast as an "Almost Live" broadcast. The sounds of power saws and people shouting and banging around in the background really helped put across the hive of activity as hundreds of people got ready to greet the public! Another Picture This Development on display was the iPhone display at the booth which demonstrated the new iPhone Dealer App. We also developed a web interface for auto app sign up, through our partners at Feedia .

Getting home just long enough to sneeze, Perry and the crew shot another webcast, much more extensive this time, and then turned right around and flew down to Southern California for another ADP event, Pacesetters. Talk about frequent flyer miles, PDX airport security greets him by name and it's NOT because his photo is posted by the xray machine. :)

All in all, it was a great success. The client seemed really pleased with the results. The local crew did great. We received many positive comments. While we were in Florida, we even had a chance to visit our Uncle Walt. I think he might just be your uncle too.
Posted by Josh Kottler at 12:27 PM No comments:

Yes, It's here, Stills and full HD. come on in and check it out.
A Whole New Class of EOS.

With a host of brand new features designed to enhance every facet of the photographic process, from still images to video, the new EOS 7D represents a whole new class of camera.

Made to be the tool of choice for serious photographers and semi-professionals, the EOS 7D features an all-new 18.0 Megapixel APS-C size CMOS sensor and Dual DIGIC 4 Image Processors, capturing tremendous images at up to ISO 12800 and speeds of up to 8 fps. The EOS 7D has a new all cross-type 19-point AF system with improved AI Servo II AF subject tracking and user-selectable AF area selection modes for sharp focus no matter the situation. The EOS 7D's Intelligent Viewfinder, an entirely newly-designed technology, provides approximately 100% coverage and displays user-selected AF modes as well as a spot metering circle and on demand grid lines. New iFCL Metering with 63-zone dual-layer metering system uses both focus and color information to provide accurate exposure even in difficult lighting. The EOS 7D also captures Full HD video at 30p (29.97 fps), 24p (23.976 fps) and 25p with an array of manual controls, including manual exposure during movie shooting and ISO speed selection. The EOS 7D features a magnesium alloy body that is dust- and weather-resistant and shutter durability of up to 150,000 cycles. Compatible with over 60 EF and EF-S lenses as well as with EOS System accessories, the creative opportunities - not just with stills but also with video - are beyond amazement.

Posted by Moderator at 10:59 AM No comments: 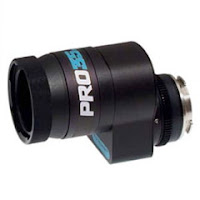 These are a few of our Favorite links: